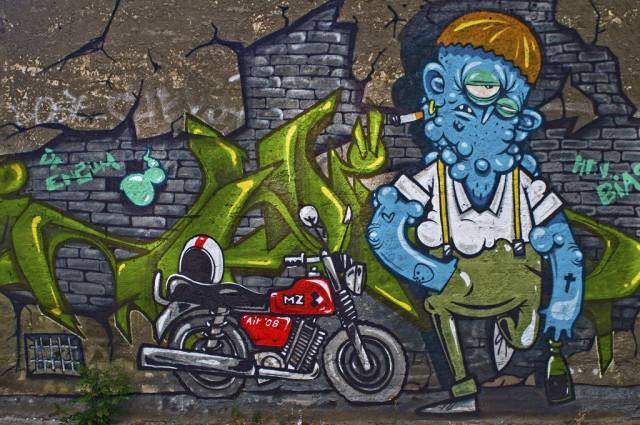 The origin of Graffiti

Graffiti art, like hip-hop, has its roots in New York's Bronx, the city's poorest neighborhood and the only one connected to the American mainland.Since the 1960s, it has been occupied by blacks and Latinos from North and Central America.They live in poorly equipped government - built apartments with run-down streets and barren weeds outside.

After years of poverty, black teenagers idolize money, and being a professional athlete is a quick way to get rich quick.In those days it was common to see groups of shirtless black boys playing basketball on one of the few basketball courts in the Bronx, many with gold chains around their necks the size of fingers.The worship of money has made public displays of wealth fashionable in the Bronx.Of course, there are a lot of young people started to do drug trafficking, pimps and other illegal business.

All over the Bronx at that time, gang symbols were scrawled in squiggles, intermixed with the obscenities of "toilet literature".Us newspapers described the Bronx as "like a ghetto of savages".No wonder people associate graffiti with primitive people, because the earliest human words and paintings were carved on walls, and those murals are the only records of civilization left by prehistoric people.But with the emergence of paper, murals have become the symbol of uncivilized.Especially after the emergence of the city, modern people seem to have been used to the smooth surface of the building, any pattern has become a kind of destruction, a kind of anti-civilization spiritual pollution.

If the Murals of the Bronx live on in the era of gang labels, there may be little to say about future generations.However, a few talented painters, frustrated with the poor gang labels, started designing their own, and the gang symbols have been looking good ever since.Then a group of rebel non-gang painters finally realized that the wall was the cheapest and most useful canvas in the world, and they started to act.From then on, a new art form -- "Graffiti" was born.

Most of the real graffiti artists have nothing to do with gangs. They come from the bottom of the poverty line.They were people with ideas, and from then on the walls of New York were the words of caution.They were talented people, and many new techniques of painting (especially fine print) emerged.They are a group of people who express their desires, who are willing to haunt the darkness of New York City all year round for no pay, just to let the passerby have a look at their work.To draw a line under the gang's "taggers", as well as its simp-minded doodlers, they call themselves "writers" rather than "painters".

Next Next post: How to properly clean Air Force 1